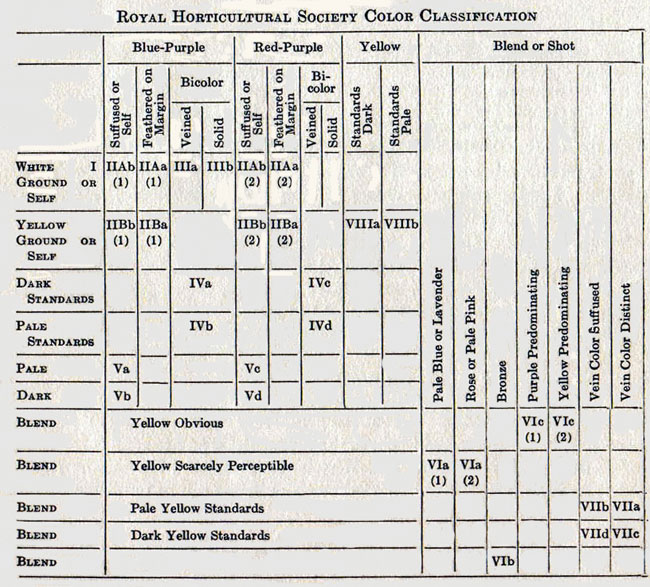 In 1922 AND 1923 the American Iris Society published abbreviated check lists (Bulletins 4 and 8) of Irises considered to be in commerce but omitting, for reasons of expense of printing, several thousand older Irises that were believed to be obsolete. Research, however, has been continued and this present work attempts to publish all that is know about Iris names that have appeared in gardening literature during the last hundred or more years. The officers have felt that this information which had been compiled by much hard work, was of great value for students and ought to be placed in permanent and available form.

Before the abbreviated lists were published, seven typewritten editions appeared in the years 1919 to 1921. It is from the seventh edition that much of the material in the present list has been drawn, but continued research has brought to light much additional information. Many new species and hundreds of new varieties have been introduced since Bulletin 8 was published and these also are included in this present list.

The first work on the Iris check lists was begun by R. S. Sturtevant, E. H. Krelage and myself in 1919 and 1920, and we all feel happy that Mrs. Peckham has been able to bring this work from our necessarily crude beginnings to its present complete form. We believe that this present work will stand for many years as the most complete book of reference on the Iris. It is a book not only for students of the past but for catalog makers of the future. We hope Iris breeders and nurserymen alike will study it carefully and so spare us, who love Iris as flowers, the many confusions of names that have been so exasperating. Such confusions have been unavoidable in the past when no ready reference book was at hand. This book (and its future supplements) will make it so easy, for those who introduce new varieties, to avoid the duplication and confusion, that those who persist in the practice in the future may well be branded as either ignorant, careless, or deliberate deceivers.

Bulletin 4 was printed under the auspices of The American Joint Committee on Horticultural Nomenclature. Bulletin 8 was a reprint from Standardized Plant Names published by this Committee. In this present list we have tried to conform to the spirit of this Committee but certain changes due to more complete information have necessarily had to be made. This has been most noticeably true in the Japanese Iris for the work of Dr. George M. Reed of the Brooklyn Botanical Garden has often changed former points of view in regard to this great branch of the Iris family.

The thanks of the officers and members of the American Iris Society are due to the Editor for the completion of such a long and arduous task. Perhaps only those who have worked on this list in previous years can understand how much work has been necessary to verify hundreds and thousands of names and the many references to them.

Even the peaceful and lonely atolls of the South Seas are swept at times by fierce hurricanes causing, so rumor has it, the inhabitants to cling for protection to what flexible vegetation with a sufficiency of tenacious roots may be at hand. Where then is a poor, deluded Editor who was washed up, as it were, on the job, to go to escape the storm of criticism that is sure to burst forth upon the publications of such a list as this? All we can do is to say that no one knows better than we that there are mistakes, that it has been impossible to look up all the references, that what often seems wrong to the person who has been looking at a mistake in print for years, may really be a correction! We have tried hard to improve this list and, could publication been delayed a year or so, perhaps the final result would have been better. However, there is such a need for a reference list of Irises that every year its appearance is postponed more and more mistakes and complications will arise.

Each special publication of an association such as the American Iris Society is a link in the chain of progress made in the study of that particular genus of plants, and, like the links in a chain, each part is necessary to the whole. Because a new check list was to be published, a definite policy on registration had to be adopted, and so on. Plant societies are beginning to realize that registration of names is increasingly important. The American Iris Society has made that henceforth they will not knowingly register a name for an Iris that has been used before for any other Iris and that they will try to avoid names that too nearly resemble each other. At one time, when the American Iris Society was just starting its activities, names were registered that had been used for varieties supposed to be extinct. This has proved to have been a mistake, as set of old varieties, true to color description and purchased from the original introducers, have turned up in distant lands – Australia, for instance. We believe that with the use of this list and the cooperation of The Iris Society (England) in the matter of registration, much unhappiness and disappointment through the duplication of names will be avoided. We ask breeders and introducers then, before they name their Irises, to consult this book. If the name they have chosen is not found here they then write the Registrar of the American Iris Society or of The Iris Society, Mr. Peter Rudolph Barr, 11 King St., Covent Garden, London, submitting their list. After due time they will be notified which of their names are acceptable or if any of them are already on file awaiting publication. In the latter case the applicants will be notified at once and will have the opportunity to submit new names. The list of registrations will be published each year and it seems a small effort to make to assure oneself that a name is secured to the particular variety one has raised.

It will be noted that some new names have had to be made by the American Iris Society to replace duplicate names where varieties are of importance. Where duplication occurs the policy will be to add, where practical, the name of the originator or introducer to that of the Iris to indicate whose Iris it is. English names will not be fabricated for varieties simply to have an English name. Names will retain their foreign spelling as originally introduced unless they have become better known in abbreviated form. This list as here published may seem inconsistent in that in some cases the titles have been retained while in others they were removed. Names that were shortened in Bulletin 8 have been retained except where the new form was generally ignored, in which case the form usually used has been now confirmed. There is a tendency in modern catalogs to shorten names and, while the American Iris Society desires concise names, it will in future discourage the removal of a title that definitely distinguishes one Iris from another.

The color keys, inadequate as all abbreviated descriptions are, will be considerable help in checking nursery mistakes caused by the mixtures of plants where the grower is not familiar with Irises and, for this reason alone, their inclusion has seemed worthwhile. References to the Royal Horticultural Society color classification are also included and awards noted. It is very difficult to get definite information even about awards and, although the large horticultural societies now keep lists there are always discrepancies and mistakes as to raisers’ names with gaps as one goes back. If originators do not even remember the varieties they raised and who they sold them to, they certainly cannot be expected to be clear as to just what awards the Irises received! Parentage, whenever known, is given as an aid to future breeders. Many of the names of botanists have not been included among the abbreviations as they are so well known to librarians that it has not seemed necessary, particularly where there are only one or two references. The list is completely alphabetical and follows the telephone-book in that title and prefixes are not grouped but take their natural place according to spelling.

It would be impossible to name all those who have aided in the compilation of this list, their names, like those of the Irises, run into large numbers. Their help has been received with grateful appreciation and the Committee hopes that each and every one who has lent a hand will know through this very slight acknowledgement, that their contribution has been the one, whether a part of the foundation or ridge of roof-tree, that completed the finished whole.

From the Flower Garden of Breck’s Book of Flowers 1851:

“There are many other fine Iris in cultivation, with which there has been such a hocus-pocus game played by the florist, that it is impossible to tell their origin.”

“One of the most serious difficulties the American Joint Committee has had to encounter is the duplication of names caused by the re-use of established names for the new introductions, or, in some cases, the renaming of old varieties; in fact, these mischievous practices have caused a large part of the chaos in common names of plants which now exists in American horticulture. The duplications doubtless occur more as a result of ignorance than deliberate intent to deceive. The genus Iris is a conspicuous example of this bad practice.”

This list includes, as far as possible, all species and varieties usually classed under three main groups: Group I, Bearded Iris (Pogoniris); Group II, Beardless Iris (Apogon) and Crested Iris (Evansia); Group III, Bulbous and Miscellaneous Iris; because these groups are distinct both botanically and horticulturally. These names are taken from the Check List of the American Iris Society, seventh revision, December, 1921 with additions and corrections up to January 1923, which gives all species and varieties that have been introduced into American commerce, from Check List No. 8 of the American Iris Society, October 1923; American Iris Society Registration Lists, Botanical and Horticultural periodicals, catalogues and all Iris names that have been located up to September 1st 1929 as recorded in the files of the American Iris Society, leaving out only those name that are palpable misspellings and which are so easy to detect that the source is apparent.

The names of the originator or, sometimes, the introducer followed by the date of introduction are given in parentheses where these facts have been ascertained. Sources of information are believed to be accurate but are not guaranteed. In the case of species, the name of the person making the first description and date of publication are given with district of distribution following. Where the abbreviation ‘Coll.’ Is used a wild form was collected. Immediately following the name of the Iris comes the Section to which it belongs, then the color-key symbols, name of originator or introducer, date of introduction after which the catalogue listings, bibliographical citations, foreign color classification symbols and citations; awards and citations, registrations, parentage, synonyms etc.