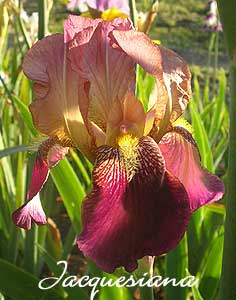 Up to about 1910 the Iris in American gardens were loosely known as Flags or German Iris. The word German came from the plant Linnaeus had named Iris germanica, because it had been sent to him from a German garden. It was to be seen in many gardens blooming in mid-May along with Florentina and a purple self similar to what we now know as Kochii. In early June in New England there were to be seen such varieties as Albert Victor, Flavescens, Aurea, Honorabile, Mme. Chereau, Victorine, Neglecta, Sambucina and Jacquesiana.

Most of the persons who had these in their gardens did not know these names or their origin. They were just “flags” and they bloomed year after year with little attention.

Between 1910 and 1920, new varieties began to appear in European and American catalogs. The few American gardeners who tried them were astounded at their color range and at the size of their flowers. They became so enthusiastic that through letters to nurserymen and articles in magazines they came to know each other and this in turn led to the formation of the American Iris Society in 1920.

Today when several thousand members of this Society in all parts of the world know each other, or of each other, it is hard to realize how isolated the Iris growers and breeders of the early part of the century were, how little they knew about Iris varieties, about their wild origin or hybrid parentage, or about what other Iris breeders, either in distant places or nearby, were doing or trying to do.

Through the American Iris Society and the Iris Society of England, the scattered literature on Iris was assembled. Iris history, past and present, was recorded, meetings and shows were held in various parts of the country and breeders were encouraged to make further strides in the improvement of the flower. As a result, we have the magnificent varieties of today.

It is true, of course, that not all the breeders’ “geese” are “swans”. Many seedlings of little distinction are introduced each year. Much more careful testing and rigid appraisal is needed.

It may be useful for the more recent converts to the cult of the Iris to pause and consider the status of Iris growing in the first two decades of the century. Some hundreds of varieties were listed in catalogs. Through the work of W. R. Dykes and A. J. Bliss, we know that nearly all of these were hybrids of the blue Iris pallida of Italy and the yellow and brown Iris variegata of Hungary and Bulgaria. At that time, however, they were grouped not only under these species, but also under the supposed species (really hybrids) amoena, plicata, neglecta, and squalens.

There was a wide color range, but the flowers were small, often of poor form and of poor substance, and were nearly always badly crowded on the stem. 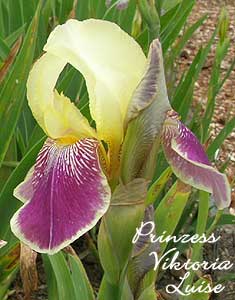 The first novelties of the first decade of the century which began to whet the appetite of Iris growers were also of this parentage. A set from the German firm of Goos and Koeneman included the white and purple bicolor Rhein Nixe and the yellow bicolors Iris King, Loreley, Gajus and Princess Victoria Louise. Then came the first American seedlings, Glory of Reading, Mt. Penn, Quaker Lady, Windham and Wyomissing raised by Bertrand H. Farr of Wyomissing, near Reading, Pennsylvania. To these were soon added the new hybrids which were to revolutionize the Iris. They sprang from the pallida-variegata hybrids crossed with new large flowered species or forms from Asia Minor.

About 1880 an English amateur gardener, Professor (later Sir) Michael Foster had wanted to produce large flowered Iris. He asked missionaries in Asia Minor to look for wild plants bearing unusually large flowers. For nearly 20 years he received such plants identified only by place names. He used them for breeding and gave many of them to friends before they were named or carefully described. As a result, we do not know to this day the exact parentage of all of the new large flowered Iris.

Foster’s own large flowered seedlings were not sent into commerce until long after his death in 1907. They included Caterina, Crusader and Lady Foster – and were said to be hybrids of cypriana. (Various plants under the name cypriana were later identified as mesopotamica and trojana.) Foster’s friend, George Yeld, introduced a similar strain which included Lord of June, Halo and Neptune. They are now called hybrids of Amas which is not usually regarded as a true species, but were at one time regarded as trojana hybrids.

In France the nursery firm of Vilmorin had used what it had under the name of Amas and introduced first Oriflamme, then Alcazar and finally Ambassadeur, Ballerine and Magnifica, the last being reputed to have also Ricardi in its parentage. Ricardi which was widely used by the amateur, Ferdinand Denis, in Southern France, is now regarded as a form of mesopotamica. Denis’ seedlings included Mlle. Schwartz which was for a time popular in California but not reliably hardy in the east. That was true also of Magnifica, of Caterina and Lady Foster, and of the later introductions of Foster’s friend, Sir Arthur Hort (which are said to trace back to Caterina).

A third Frenchman and near neighbor of Vilmorin introduced during this same period the remarkable Souv. de Mme. Gaudichau with parentage first given as pallida dalmatica, but now generally supposed to have been Amas or something close to it. 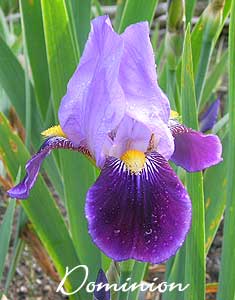 Now we come to A. J. Bliss of Devonshire. Dykes had interested him early in the century in the controversy about the authenticity of the supposed species amoena, plicata, neglecta and squalens and set him to Iris breeding. From a plant he had under the name of Asiatica (and which he later lost) (it is now believed to have been Amas), he produced a deep purple seedling that he was sure was the greatest Iris in the whole world. It had a stout stiff stalk, a large flower of great substance, flaring almost horizontal velvety falls and wonderful texture. He named it Dominion. His boasts brought the nurseryman R. W. Wallace (who had just introduced Foster’s seedlings) to see it. He also thought it was the finest iris in the world and said so in his catalog, and to be sure that his customers would be properly impressed, he asked for it in 1917 not the usual 4 or 5 shillings, but 5 pounds!

It was this Iris, plus those I have just mentioned, that precipitated the Iris furore in Europe, and the flood of introductions from Bliss, Perry, Vilmorin, Millet, Denis and Cayeux and others in the decade 1920 to 1930.

Meanwhile, in America, Farr was introducing such varieties as Pocahontas and Anna Farr and his many seedlings were being widely grown and creating great Iris enthusiasm. E. B. Williamson, an Indiana banker, and later vice-president of the American Iris Society, used Amas in his crossing and introduced Lent A. Williamson. J. Marion Shull of the U. S. Dept. of Agriculture crossed this with trojana and introduced Morning Splendor. He became convinced that the five Iris, Dominion, Ambassadeur, Souv. de Mme. Gaudichau, Lent A. Williamson and Morning Splendor, raised by five different breeders in three different countries, all had the same or very closely related ancestry. A sixth breeder, Clarence Connell of Nashville, was soon to follow in this same pattern with Dauntless. Still another, Mr. Wareham of Cincinnati, was actively breeding with Dominion before 1920, and producing outstanding seedlings which, however, were not introduced until 15 or 20 years later when they were no longer unique. To all of these varieties the term “Dominion Race” was loosely applied, although the term was invented by Bliss to cover merely his varieties Bruno, Cardinal, Duke of Bedford, Moa, Titan, and one or two others.

In New England a totally different development was taking place. Miss Grace Sturtevant in Wellesley Farms was working with one or more forms of pallida (sometimes pallida dalmatica is mentioned, sometimes Celeste) (in the early days there was a good deal of confusion about pallida dalmatica and many people had Albert Victor, Celeste, Odoratissima, and Tineae under that name). This she crossed with Aurea and raised some charming blends such as Palaurea and Afterglow. One of these seedlings crossed with Celeste produced Hope, a variety of little importance, but from it in the next generation the variety Shekinah was produced. This was the most important yellow Iris of its day, but it was much more than that. It was the first yellow of known pallida parentage, and the first yellow to succeed in the warm climate of Southern California. Nearly every Iris breeder who has since worked with yellows has used it somewhere in the family tree.

The breeders I have mentioned laid the framework for the modern Iris of today. Modern breeders should recognize their important work and should be familiar with their most important varieties in order to more fully understand the varieties of today which are their progeny. A good collection of well grown old varieties is also often an eye-opener in showing to the complacent breeder that some of his seedlings are duplicates or near duplicates of their ancestors. My interest in the old varieties has led me to assemble on the grounds of Swarthmore College about 100 of them in an historical collection arranged chronologically. There is a similar collection in the Presby Memorial Garden in Montclair. I hope that New England Iris growers will visit both these collections and see for themselves how interesting they are.