From the Cooley’s Gardens catalog for 1937: “Deep fluorite purple self, with very rich falls. The opening flower is almost black, and the heavy blue beard tends to increase the depth of color. This is the leading fall-blooming iris in commerce today, because it increases very fast, is most reliable in flowering habit, and is one of the most beautiful irises in the garden regardless of its added value as a rebloomer.”

From National Iris Gardens 1938: “a flourite purple with very rich falls…a rebloomer”.Please see photo below which is contained in National’s catalog which differs significantly from the ‘almost black’ iris Black Magic’

Provenance: It is generally accepted that Eleanor Roosevelt and Black Magic, two distinct cultivars when they were introduced in the mid 30’s and similar in color and blooming habits were inadvertently and irretrievably mixed up early on, so that today they appear to be the same iris, and one cultivar did not survive. The other was sold under both names.. While most people allude that the surviving cultivar is Eleanor Roosevelt, a case could be made that it is really Black Magic that was the survivor, but now carries the name Eleanor Roosevelt, and Eleanor was the loser, but there is no definitive proof either way.

When Wayman featured both these iris as Intermediate Bearded iris in the 30’s catalogs, posting artist depictions next to each other which are quite different in appearance, we can assume they must be different iris at that time, as Robert Wayman was a reputable iris hybridizer and seller,  Black Magic being his own creation.

We don’t know if the other cultivar, the missing one survives to this day. Some people continue to study and compare BM to ER but no differences can be noted between the various BM’s and ER’s growing in modern gardens.

Here is  Wayman’s depiction of Black Magic, to compare to his depiction of ER to and you can clearly see they are both different iris. 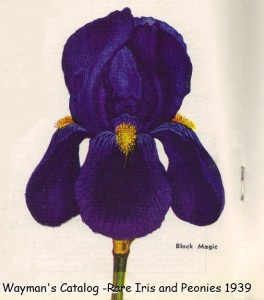 Each photo in our gallery is assigned a vetting symbol to evaluate its accuracy. Please click here for a list and descriptions.